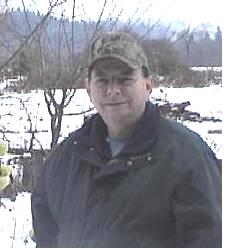 Bob Zerfing grew up in the Pacific Northwest. He graduated from Multnomah Bible College and spent five years pastoring a small rural church in Oregon. Bob is an army veteran who enjoys hunting and fishing as much as he enjoys a great novel, and these all show in the U.N. Covenant series he wrote.

It all started one morning while he was standing on a ridge above Cougar, Washington. The United States had just invaded Afghanistan, and as Bob looked out over the miles of lush Pacific Northwest forests, he wondered if that could ever happen here. Could a foreign army ever occupy America? If so, how, and what would he do? Thus, the U.N. Covenant series was born.

Bob’s novels are action-packed adventure stories that are fun to read, but aren’t laced with foul language, graphic sex or immorality. They are enjoyed by young and old, male and female, Christian and non. His characters are believable folks that you can relate to.
Bob’s goal in writing is for you the reader to enjoy the characters and story so much that you can recommend his books to others with no reservations. If that happens, he will consider himself a success.